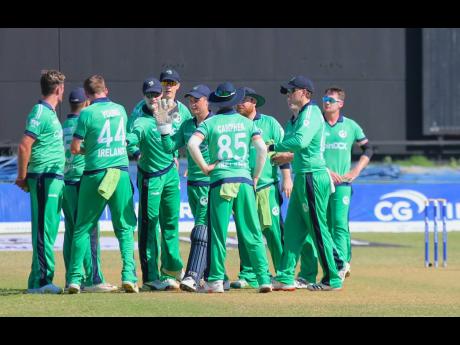 Lennox Aldred
Members of the Ireland team celebrate the fall of a West Indies wicket during the second One-Day International at Sabina Park yesterday. photo by Lennox Aldred

The West Indies put in a lacklustre performance and in the end succumbed to Ireland by five wickets, under the Duckworth Lewis Method, in the second One-Day International (ODI) at Sabina Park, to leave the series squared at one apiece, with one game to play.

Once again, it was the brittle batting of the regional side that was tested by the disciplined Irish bowlers, as the West Indies had to rely on their late order batters to get them to 229 all out in 48 overs.

That score didn't seem like enough from the get-go, and the resolute Ireland batters got over the line in the end at 168 for five, despite the rain intervening late in the afternoon and Duckworth Lewis coming into play.

The West Indies were asked to take first strike and were once again in trouble early as they lost wickets at regular intervals. At one stage, they were 104 for six in the 31st over, and it took some late-order hitting from their rookie all-rounders Romario Shepherd and Odean Smith, who contributed 50 and 46, respectively, to add to Shamarh Brooks’ 43.

Shepherd and Smith added a valuable 58 runs for the ninth wicket before player of the match Andy McBrine wrapped up the innings with his fourth wicket when he bowled Shepherd. He got good support from seamer Craig Young who bagged three wickets for 42 runs.

In reply, the Irish openers looked determined to get a good start, and they got to 37 before captain Paul Stirling handed Akeal Hosein his first of two wickets.

After Roston Chase got rid of William Porterfield for 26 with 60 runs on the board, the Windies felt they were back in it. However, McBrine (35) and Harry Tector, wrestled back the initiative with a 44-run third-wicket stand.

Tector found another useful partner in Curtis Campher, and they put on 53 runs for the fourth wicket before Campher was bowled by Hosein for 12.

Tector would continue to bat solidly and got to his half-century just before the rain came.

When play finally got back underway, the Irish side needed just 11 runs from 28 balls under the Duckworth Lewis Method, and, despite George Dockrell falling to captain Kieron Pollard, Tector (54 not out) and Gareth Delaney (one not out) saw them over the line with 20 balls remaining.

A. Hosein c Adair b McBrine 11

A. McBrine c Joseph b Shepherd 35