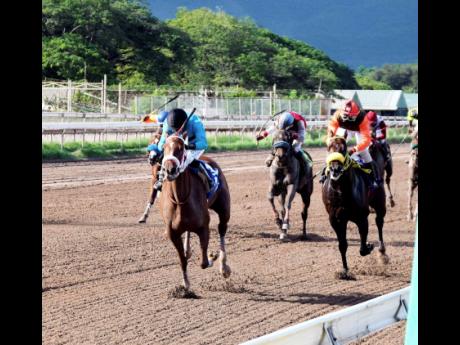 GOD OF LOVE is down in class and on the prowl, returning to overnight allowance for the Gerry Skelton Memorial at five and a half furlongs tomorrow, having notched his only victory this season when similarly lowering his sights in June.

However, GOD OF LOVE will have to be at his sharpest with topweight 126lb, allowing ALEXA’S LODGE 10lb, after her brave run against NUCLEAR NOON at five furlongs round on November 6.

Though he ran an even sort of race for fifth behind DUKE at five furlongs round last time out, GOD OF LOVE appeared off-colour, staying on for fifth, just ahead of VICTORY TURN and SALVATION, after LEGALITY went by him a furlong and a half out.

Lining up both performances, a week apart, at five furlongs round, GOD OF LOVE finished fifth in 1:01.0 with 122lb whereas ALEXA’S LODGE, who was always attacking the pace set by DEEP BLUE SEA, was second in 1:00.2 with 112lb, cut down by fast-finishing NUCLEAR NOON.

Though GOD OF LOVE raced a level higher, the splits were similar, set by VICTORY TURN and slow-starting topweight, FATHER PATRICK, who made his bid two and a half furlongs out. GOD OF LOVE never factored in the pace and was still seventh at the furlong pole.

In contrast, ALEXA’S LODGE was always in contention from the top of the lane, and stayed on to get the better of DEEP BLUE SEA after NUCLEAR NOON fell out of the sky at the wire.

In-form ALEXA’S LODGE represents NUCLEAR NOON, who had clocked a solid 1:12.4 at six furlongs in his previous race, beating REGNANT, capitalising on BILLY WHIZZ’s misfortune at the gate in the Tack Room Trophy.

For NUCLEAR NOON to have been ridden flat to the board by Robert Halledeen to overhaul ALEXA’S LODGE and DEEP BLUE SEA, the quality of the event stands out, authenticating splits of 23.1, 34.2 and 46.3.

ALEXA’S LODGE’s narrow loss to out-of-class NUCLEAR NOON, who was beaten two races prior by SECRET IDENTITY, a fast 56.3 at five furlongs straight, gives the filly a solid chance of ambushing down-in-class but suspect GOD OF LOVE.