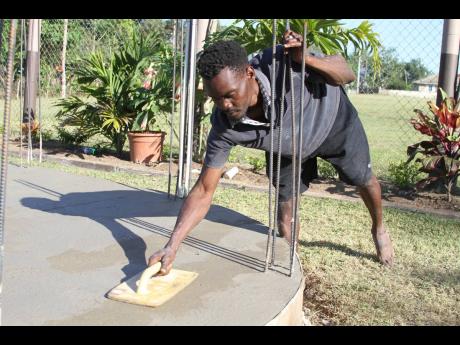 File
Scot Bamburry working at a car wash in Wood Hall, Clarendon, in May 2021.

Almost a month after stevedore Scot Bamburry fell overboard a vessel and died, the body has still not yet been released by the police.

KWL, which has conducted an internal probe, said it awaits the findings of the police investigation before commenting further.

“Additionally, the Ministry of Labour is conducting its own independent investigation,” Williams told The Gleaner Tuesday.

Bamburry, who hails from Wood Hall, Clarendon, catapulted to public attention after being featured in a May 2021 edition of THE STAR as a down-on-his-luck maritime university graduate.

Armed with a 2008 diploma in international shipping and logistics, Bamburry expressed frustration at not finding a dream job in that industry.

That dream was fulfilled a month later.

The 39-year-old’s body was recovered from the water on July 14 this year – two days after he fell overboard at Berth 8 of the Port of Kingston.

Inspector Andrew Ebanks of Border and Security said Tuesday that his department was still awaiting the results of the post-mortem, which has not yet been conducted.

Meanwhile, Shanroy Shirley, a health and safety expert for more than 20 years, has given insight into the dangers of cargo shipping jobs and crucial protocols that can mitigate risk.

Shirley, who worked for years at the Kingston Container Terminal (now Kingston Freeport Terminal Limited), said that Kingston Wharves Limited has a legal duty to protect the health and safety of workers under the Jamaica Factories Act.

“From my experience working on the port, timing is always a critical factor in the shipping industry. The time taken to unlash or lash containers on a vessel is a factor that affects the vessel’s operational and sailing schedule,” Shirley said in a Gleaner interview.

“With that being said, this sometimes leads to workers rushing in carrying out their duties or even taking shortcuts on the job and compromising their safety.”

Lashing and unlashing – done to prevent containers from falling off vessels – involve the lifting of long and heavy bars that are connected to a turnbuckle.

Shirley said that stevedoring involved inherent high-risk hazards such as working at heights, ergonomics, and the threat of falling objects.

Without specific policies, programmes, and procedures outlining guidelines to managers, supervisors, and workers, Shirley said it would be near impossible to hold anyone accountable for safety infractions or non-compliance.

The registered safety professional said that efforts must be undertaken to limit risks and to ensure workforce safety compliance, such as the use of a harness or lanyard.

“Stevedores are directly supervised by KWL. The work that the stevedores perform are done on a shipping vessel on which the captain of the vessel has ultimate responsibility for the safety of anyone that boards the vessel,” said Shirley, founder and CEO of the Canada-based R.I.L Safety Solutions Inc and Jamaica-headquartered A&S Consultants.

“This creates a very precarious situation when it comes to safety accountability and responsibility,” Shirley said.

While the Jamaican workforce awaits the long-overdue Occupational Safety & Health Act to be enacted into law, employees continue to rely on the Jamaica Factories Act of 1961.

Section 78 of the legislation holds the owner, manager or supervisor legally responsible for implementation and compliance.