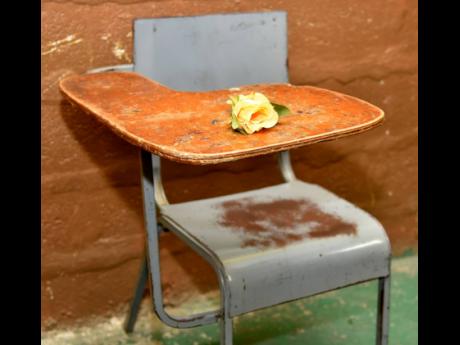 Kenyon Hemans
A rose lies on the desk of 15-year-old Kimanda Smith at her school, Achievers’ Multi Resource Centre, after the school was informed that she was killed along with her siblings at their home in Coco Peace Clarendon on Tuesday. 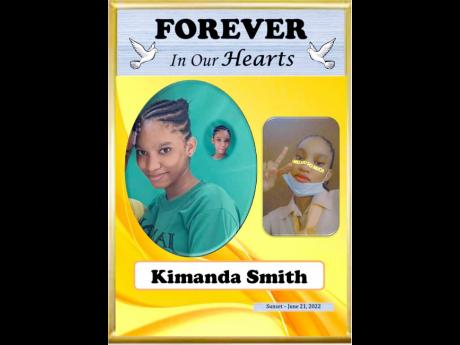 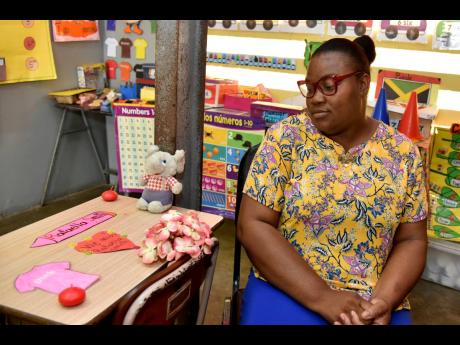 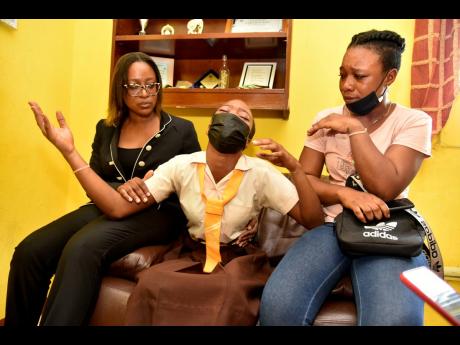 Kenyon Hemans/Photographer
Terryanne Henry (right) looks on helplessly as her daughter, Leah Vanhorne of the Achievers Multi-Resource Centre, grieves the slaying of her best friend, 15-year-old Kimanda Smith, on Wednesday. Trying to console Leah is Blondel Duffus, the school principal.
1
2
3
4

Leah Vanhorne is still half-hoping to see her best friend, Kimanda Smith, at their graduation ceremony today. But the 15-year-old, who was one of five victims of a massacre in the rural district of Cocoa Piece on Tuesday, will not turn up for the...

But the 15-year-old, who was one of five victims of a massacre in the rural district of Cocoa Piece on Tuesday, will not turn up for the long-awaited rite of passage, even as Leah tries to suspend belief and freeze time.

“Don’t you nuh dead? Don’t a lie dem a tell? You a come a graduation Thursday, so mi a go see you,” she sought to reassure herself.

But despite her screams for an answer, the tight grip of her mother, Terryanne Henry, and the soothing strokes of school principal Blondel Duffus, could not offer relief as she wept bitterly.

There was hardly a dry eye at the Achievement Multi Resource Centre on Chapelton Road in May Pen on Wednesday, but Leah’s heartbreak trumped that of all others.

Her grief was tinged with regret as she remembered the last interaction last Wednesday when her friend asked her to accompany her somewhere but Leah instead walked home.

“If mi did know it would be the last time,” she said, before her voice trailed off in a paroxysm of pain.

Leah could not attend school on Tuesday as she was too torn up after Cocoa Piece awoke to the deaths of Kimanda, her mother 31-year-old Kemesha Wright,, and her siblings – Rafaella Smith, Sharalee Smith and Kishawn Henry Jr.

They were all found with their throats slashed.

Roshane Barnett, a cousin to the family, was named a person of interest and is now in police custody after being arrested in Trelawny.

But Leah mustered courage and strength to attend school on Wednesday as she sought the intervention of counsellors.

A day earlier, she and her mother had tracked developments about the quintuple murder. Oblivious that it was Kimanda’s family, they had expressed astonishment at the callousness of the attack.

But while out from home, she had grown suspicious that her best friend was among the dead. Her worst fears were realised when she saw missed calls on her phone.

Leah still has fond memories of Kimanda - like her dreams of becoming a policewoman and how she loved her siblings and showered them with gifts and goodies.

Duffus said Kimanda had been transferred to the institution from Edwin Allen High School last September and made “a huge impact on the students”.

“I remember her as just the prettiest, sweetest little girl, she was very quiet, very reserved, very shy, but she was a leader. I appointed her monitor of her class when I saw how organised she was,” the principal said.

Kimanda died without discovering that she got a perfect score on her mathematics exam. At today’s graduation, she would have been collecting two prizes – for Academic Achievement and for being Most Helpful.

Staff and students are also struggling to cope.

“They are all devastated, even though some hardly show emotions. Yesterday they put their hands to their faces to hide that they are crying,” Duffus told The Gleaner.

“We have had several students breaking down, falling to the ground in pain ... My heart aches for them and the staff.”