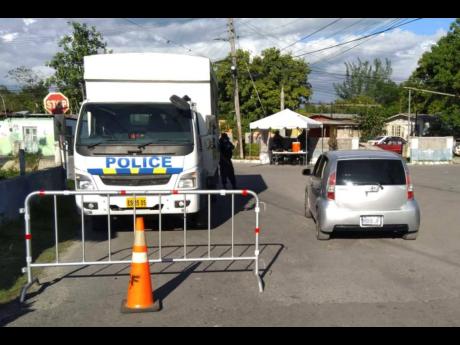 File
A police checkpoint is seen in the community of Russia, Westmoreland. The prime minister has announced the imposition of a zone of special operations in southern Sav-la-Mar for 60 days.

National Security Minister Dr Horace Chang has said that allegations of abuse by soldiers within the zone of special operations (ZOSO) in Savanna-la-Mar, Westmoreland, will be probed by the army.

Residents in the troubled communities of Coke Street and Queen Street in the Westmoreland capital have complained that they were abused by members of the Jamaica Defence Force (JDF) during operations last Friday and Saturday.

Chang confirmed having heard of the allegations.

“I got a call on it, and I instructed them to report it to the commanding officer, and any such things will be thoroughly investigated,” he said Thursday. “That’s a matter in the army’s purview.”

Bishop Oneil Russell, president of the Coke Street Citizens’ Association, told The Gleaner that his nephew and his neighbour were removed from their private dwelling and beaten by soldiers operating in the northern section of Savanna-la-Mar, where the ZOSO is in effect.

In the case of the first alleged victim, Russell, who is also pastor of the Ark of the Covenant Holy Trinity Church, is claiming that the soldiers accused a 17-year-old young man of operating as a spy, charging that he had been using his mobile phone to transmit warning messages to his cronies about the location of their team in the community.

According to Russell, the young man was taken to the Queen Street house of his 27-year-old nephew, to whom the youngster had reportedly been sending messages.

“They went into my nephew’s house and beat him in his chest and abdomen. Then they took both of them up to the Savanna-la-Mar Police Station and then left them to find their way back home,” said Russell, adding that the men were left to tread through territory of warring gangsters on their walk back.

“They could [have been] killed,” said Russell.

“It can’t be right for somebody to be sitting in their yard during the curfew hours and soldiers take him out, handcuff and beat him, then take him into nearby bushes and threaten to kill him,” he added.

According to the bishop, since the declaration of the ZOSO, he has been receiving numerous complaints of abuse, especially regarding young men.

“As president of the Citizens’ Association, I have a duty to ensure that the people are safe, and if they cannot be safe from soldiers and police, they can’t be safe from gunmen either,” the community leader insisted.

Russell said he brought the allegations to the attention of the commanding officer for the parish, Superintendent Robert Gordon, and Lt Col Denston Smalling, the JDF chaplain.