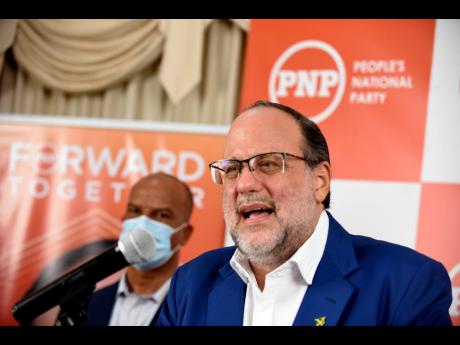 As the Government’s states of emergency (SOEs) come to a screeching halt tonight, President of the People’s National Party (PNP) Mark Golding has indicated that he is willing to pay a political price for defending the constitutional rights of Jamaicans.

On Thursday, three Opposition senators rejected a resolution to extend the SOEs. The Senate needed at least one Opposition senator to vote with the Government’s 13 lawmakers to achieve a two-thirds majority for the extension of the SOE.

“I am prepared to pay a price if that is what the Jamaican people think I should pay. I do not believe that the Jamaican people will think that standing up for their rights and for the proper use of the Constitution and for the principle of the rule of law [is wrong]. I don’t think they will exact a price on me for that, I think they will respect me for that,” Golding said during a press conference yesterday at the Office of the Leader of the Opposition.

It is now left to be seen what interim measures the Andrew Holness administration will introduce with the expiration of the SOEs in five parishes and across seven police divisions that have been pummelled by a spike in murders.

The parishes in which SOEs were declared are Westmoreland, Hanover, St James and Kingston, and St Andrew.

Yesterday, the leadership of the PNP urged the Government to maintain the deployment of soldiers in the troubled areas, arguing that army personnel can support the police without a state of emergency.

Golding said that the PNP was prepared to cooperate with the Government in an attempt to find new and better solutions for dealing with the runaway crime problem.

But Prime Minister Andrew Holness contended on Tuesday that under the SOEs, the military could operate on its own, boosting the number of law enforcement personnel to carry out peacekeeping tasks for extended periods.

Also speaking at a virtual press conference, Opposition Spokesman on National Security Peter Bunting described as “a big lie or false dilemma” the “impression” given by the Government that only SOEs could facilitate the deployment of large numbers of police and soldiers to fight crime in communities with high crime rates.

He said that for the last four decades, almost daily, the military has been deployed in support of policing across Jamaica.

Bunting said there was adequate legislation that facilitated members of the Jamaica Defence Force working with the police to fight crime without establishing an SOE.

Commenting further on the SOE debate, Golding said that parliamentarians had sworn an oath to uphold and defend the Constitution of Jamaica, noting that it was not an academic exercise but fundamental to the protection of the rights of Jamaicans.

The Opposition leader said that the ongoing routine use of the SOEs by the Government as a crime-fighting strategy has been brought into question in the courts and now before the Court of Appeal in a challenge by the Government.

“A Government that respects the rule of law would not go back to that failed and suspect strategy until the courts have finally ruled and guided them on the matter.”

He said that crime has ballooned beyond the four-year period when the Portia Simpson Miller administration was in power, with no states of emergency in place. Golding said that during that period the average number of murders was 25 per cent lower than under the Holness administration.

“We didn’t use states of emergency. We use Unite for Change. We used the Peace Management Initiative. We used a very active legislative agenda to modernise the techniques and the toolbox available to the police.”