Bruce Golding: We reap what we sow 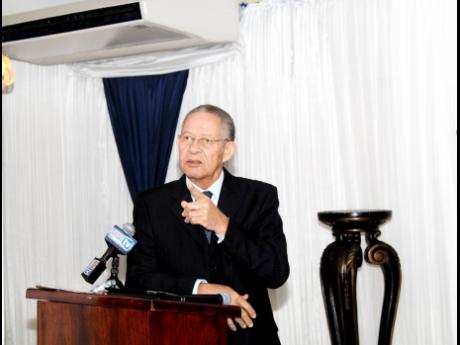 Former Prime Minister (PM) Bruce Golding is calling for greater focus to be placed on the resocialisation of citizens who have fallen victim to moral decay to tackle the country’s high crime rate.

Golding, who was speaking at the Beliefs, Values & Attitudes (BVA) sensitisation session organised by Manchester Custos Garfield Green on Thursday, said that too much time is spent lamenting the decline in social behaviour and morality without accompanying action.

He indicated that lines between right and wrong remain blurred in the minds of those who engage in unacceptable behavioural patterns and view their actions as harmless.

“ ... When I was growing up, I didn’t see 15-year-old girls pregnant ... . When I was in West Kingston (constituency), I had a 26-year-old grandmother. When a 14-year-old is having a child, that 14-year-old, first of all, wasn’t socialised properly, and even if she was in the process of being socialised, that socialisation didn’t finish at 14, but she has now has a child that has to be socialised,” he added.

Golding noted that a similar programme to address values and attitudes introduced by former PM P.J. Patterson in 1994”fell victim to the politics at the time”, but said that he came to acknowledge, through dialogue with his counterparts, that the unaddressed ills of the present will always continue to undermine future generations.

“I don’t want to leave you with an impression that I am cynical or pessimistic because I believe human beings can be changed, motivated ... . But it is going to require a kind of effort that has not been seen before. I have no doubt that it’s this socialisation failure that is causing so much of the crime, the violence,” he said.

Statistics from the Jamaica Constabulary Force for the period January 1 to November 20 show a total of 1,288 murders, trending up from 1,160 for the entire 2020.

“Nowadays when kids go to school, in their little backpack, they have the two exercise book and maybe a sandwich bag and put the little knife in there. Where did that come from?” Golding questioned

He said not only are teachers left to contend with disruptive students, but aggressive parents who often affirm the poor behaviours of their children, with their own.

With the collaborative effort of stakeholders, the implementation of the BVA programme, according to Custos Green, will help individuals see the importance of every citizen’s social responsibility and help to make Vision 2030 more achievable.

“One of things I am pushing for is to have a uniformed group in many schools in Manchester ... . The BVA initiative is geared at promoting civic pride, self-respect and respect for others, improving standards of living, creating law and order and creating a better community for all,” he explained.

The custos stated that Northern Caribbean University will be facilitating the implementation strategies of the BVA initiative through personal and professional development programmes for students, parents, and unattached youth, among other members of the targeted demographic.