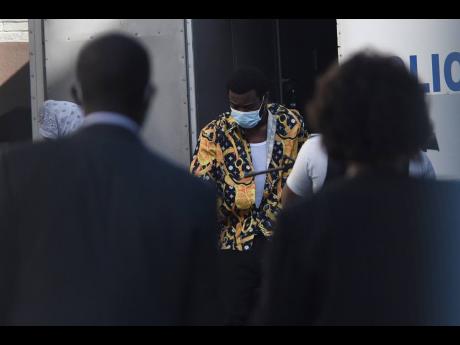 Kenyon Hemans/Photographer
One of 33 alleged members of the notorious One Don Gang, a splinter from the Clansman Gang, arrives at the Home Circuit Court in Kingston on November 11. They are being tried under the anti-gang legislation.

The lead investigator in the Clansman-One Don Gang trial testified on Wednesday that he and an ex-gangster had made an arrangement for him to secretly record conversations between himself and the alleged criminals.

The detective sergeant further recalled in the Home Circuit Court that he had given the ex-gangster-turned-state witness a smartphone in January 2019, on which to record the conversations. The ex-gangster visited his office on three different dates in January and turned in the phone when the memory was full and the phone was returned to him.

However, the police witness testified that after collecting the phone, he had turned it over to another detective with certain instructions who had taken it to the Communication Forensic and Cybercrime Unit (CFCU) at the Cyber Counter-Terrorism and Organised Crime Investigation Branch (C-TOC) and returned it to him.

The investigator said he last collected the phone from the witness on January 28, 2019.

But he told the court that he last saw the phone on November 21 this year when he retrieved the device from the CFCU and took it to the Office of the Director of Public Prosecutions.

The police witness, who is the seventh for the prosecution, is among four police witnesses who are being hastily called by the prosecution to establish the chain of custody for the recordings which the court heard were taken from the phone and stored on a compact disc.

The prosecution on Tuesday attempted to have the recordings admitted into evidence after calling two other police witnesses who had prepared the transcripts of the recordings from the compact discs, but its effort was thwarted after the defence objected.

Among the defence’s objections was that there was no evidence establishing the chain of custody, safekeeping, and integrity for the compact disc.

Consequently, the prosecution on Wednesday informed the court that it will be restrategising and, therefore, will be calling four police witnesses to establish the chain of custody.

The prosecution’s second witness, a former top-tier member of the gang, had testified that he had secretly recorded phone conversations that he had with key alleged members of the gang, including the reputed leader, Andre ‘Blackman’ Bryan, and the lone alleged female defendant, Stephanie Christie, and had handed them over to the police.

The witness said he had recorded the conversations on three phones using a call-recording application.

The lead investigating officer, during his evidence-in-chief, testified that he was introduced to the witness in November 2018 and that the witness, who had been using a false name out of fear for his life, had indicated that he wanted to give him information about the gang.

The officer told the court that the police had not made any offer or promised the witness any inducement in exchange for his statement.

According to the officer, after spending hours talking to the witness that day, they met the very next day and started recording his statements.

The police witness said they met more than 30 times and spent an average six hours daily recording the statements.

The officer said the witness had told him about the origin of the gang, its leadership and membership, and about criminal acts the organisation executed.

He also testified that the former gang member had taken him to several areas in St Catherine including Lauriston, Rivoli, the Spanish Town bus park, Jones Avenue, Tryall Heights, Thompson Pen Road, and Chancery Street in St Andrew and had shown him where the gang had murdered its victims.

The investigator said the witness had also shown him a site at Waterloo Lane in St Catherine where the gang had allegedly buried two men from Denham Town in Kingston.

Two other police witnesses who had also handled the phone testified before the lead investigator.

They outlined how they had come into contact with the phone and what they did with it.

One of the officers testified that he had collected it from the ex-gangster and had submitted it to CFCU, while the other said the lead investigator had given him the phone with certain instructions.

Bryan and 32 other alleged gang members are being tried on an indictment with 25 counts under the Criminal Justice (Suppression of Criminal Organizations) Act and the Firearms Act.

The One Don Gang is a breakaway faction of the Clansman Gang.

The lead investigator will return to the stand when the case resumes today.