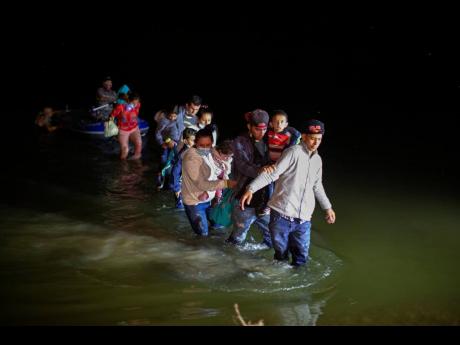 Dario Lopez-Mills
In this March 24 photo, migrant families, mostly from Central American countries, wade through shallow waters after being delivered by smugglers on small inflatable rafts on US soil in Roma, Texas.

The Biden administration said on Monday that four families that were separated at the Mexico border during Donald Trump’s presidency will be reunited in the United States this week in what Homeland Security Secretary Alejandro Mayorkas calls “just the beginning” of a broader effort.

Two of the four families include mothers who were separated from their children in late 2017, one Honduran and another Mexican, Mayorkas said, declining to detail their identities. He described them as children who were three years old at the time and “teenagers who have had to live without their parent during their most formative years”.

Parents will return to the United States on humanitarian parole while authorities consider other longer-term forms of legal status, said Michelle Brane, executive director of the administration’s Family Reunification Task Force. The children are already in the US.

Exactly how many families will reunite in the United States and in what order is linked to negotiations with the American Civil Liberties Union to settle a federal lawsuit in San Diego, but Mayorkas said there were more to come.

“We continue to work tirelessly to reunite many more children with their parents in the weeks and months ahead,” Mayorkas told reporters. “We have a lot of work still to do, but I am proud of the progress we have made and the reunifications that we have helped to achieve.”

More than 5,500 children were separated from their parents during the Trump administration going back to July 1, 2017, many of them under a ‘zero-tolerance’ policy to criminally prosecute any adult who entered the country illegally, according to court filings. The Biden administration is doing its own count going back to Trump’s inauguration in January 2017, and according to Brane, believes that more than 1,000 families remain separated.