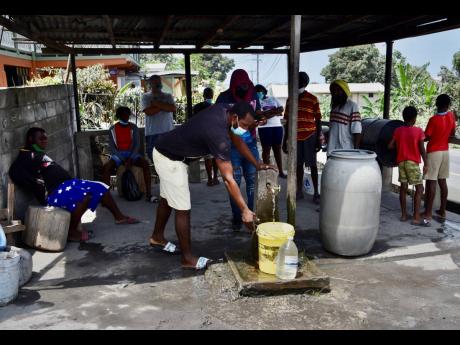 AP
People collect water not contaminated by volcanic ash after the eruption of La Soufriere volcano in Wallilabou, on the western side of the Caribbean island of St Vincent, Monday, April 12, 2021.

Jamaicans in St Vincent and the Grenadines have described the eruption of La Soufrière volcano, which has been spewing gas and ash since last week, as a frightening experience. Minister of Foreign Affairs and Foreign Trade Kamina Johnson Smith has...

Jamaicans in St Vincent and the Grenadines have described the eruption of La Soufrière volcano, which has been spewing gas and ash since last week, as a frightening experience.

Minister of Foreign Affairs and Foreign Trade Kamina Johnson Smith has said that Jamaicans living in St Vincent and the Grenadines are in the green and yellow zones under threat from La Soufrière, which is now active.

Areas closest to the volcano are designated red and orange zones, while those further away are yellow and green.

Sheryl Simpson, who lives and works in George Town, an area in the orange zone where thick ash has blanketed buildings, is one Jamaican caught in the disaster.

“My sinus killing me! My eyes burning me. My two daughters are here with me and they are just miserable. It is like we don’t know what hit us. When you look at the devastation and you think about the clean-up, it is really sad,” Simpson told The Gleaner Monday evening.

Simpson said she moved to the eastern Caribbean country in 2009 and visits Jamaica from time to time.

“One of them (the children) asthma is very bad, and we are running out of pump. We had some and a couple that were half-empty or so, and we have to dig them out, so we need asthma pump,” she pleaded.

“The short breathing and the COVID me really worried about,” she added.

Nigel Richards, who works in the agricultural sector, said he has virtually lost everything.

“What can I say, man? Everything is gone. The ash and other stuff have covered the place. Nothing can grow. So, there is nothing to buy or sell. What this means is that over the next couple months, agriculture will hit rock bottom,” he fears.

“Never get nothing like this before in my life. I live through three hurricanes and some storm here and in Jamaica, and this is the worst,” he added.

Another Jamaican, Narvel Rose, who lives close to a cemetery on the island, described the scene.

“The graves dem cover. ... The ones that have a big tombstone, you might see those peeping out, but the graveyard ashy and the graves are buried. So all those people who think they are going to be able to come and see who bury where will not see anything because they get double burial,” Rose said.

Jamaican Martha Graham, who has been in St Vincent since the early 2000s, said the events of the past few days have been frightening.

“I am in Kingstown, so not much disturbance here except from the ash. But hearing everything and see it is frightening. You see these things in movie. But I am thankful because it could have been worse because they were wondering if lava and fire was going to come out and just burn up everything. So we have to be thankful for small mercies,” Graham told The Gleaner yesterday.

Several Caribbean countries and organisations have been coordinating aid for St Vincent and the Grenadines.